After 23 years of competition, one of the legends of the sport; Frederik Van Lierde, has celebrated his farewell, clinching one last victory in his hometown race of Menen, Belgium.

In a stellar career that included victories at 9 Ironman races (Hawaii, 5x Nice, South Africa, Mexico, Lanzarote) and in addition achieving 3 top-10 finishes in Hawaii, the Mecca of long distance triathlon (3rd in 2012, 8th in 2014 and 10th in 2016). He also has 4 Ironman 70.3 titles to his name. A former swimmer, Frederik started in the triple discipline sport in 1997. At the age of 23, he won his first victory by becoming Belgian elite champion (2002). Finding himself better off over long distances, he succeeded on his entry into the matter by winning the continental title over the distance in 2007. His first success on Ironman took place in Nice, in 2011.

A place that will mark the history and career of the Belgian triathlete, going on to win there 5 times, the last time in 2018. Frederik Van Lierde's most important coronation remains that of Hawaii, in 2013, when he became Ironman world champion ( in 8:12:29). Second Belgian winner of this legendary complete triathlon, he succeeded Luc Van Lierde, who is not related to him, but has been his trainer since 2011.

The 41 year old West Flemish would have wanted to end his career by trying to become the absolute record holder on the Ironman in Nice, on October 11, but the cancellation of the event forced him to anticipate his farewells. In front of his supporters, Van Lierde completed almost the entire race in the lead on Sunday around Menen. In the end he took his last victory in 3:40:57, ahead of Pieter Heemeryck (3:41:02) and Bart Aernouts (3:41:05) who in a very obliging and gentlemanly way left all the honors to the local triathlete.

Van Lierde announced three years ago that he would stop this year. The circle was rounded off nicely with a farewell triathlon from his own people. It was always Van Lierde's wish to stop at the highest level and that it was, training and pushing himself just as any other year, to give his best right up until the curtain came down on his final race.

"It was hard to keep the focus through the whole race ... my 2 transitions were not the fastest in my career" 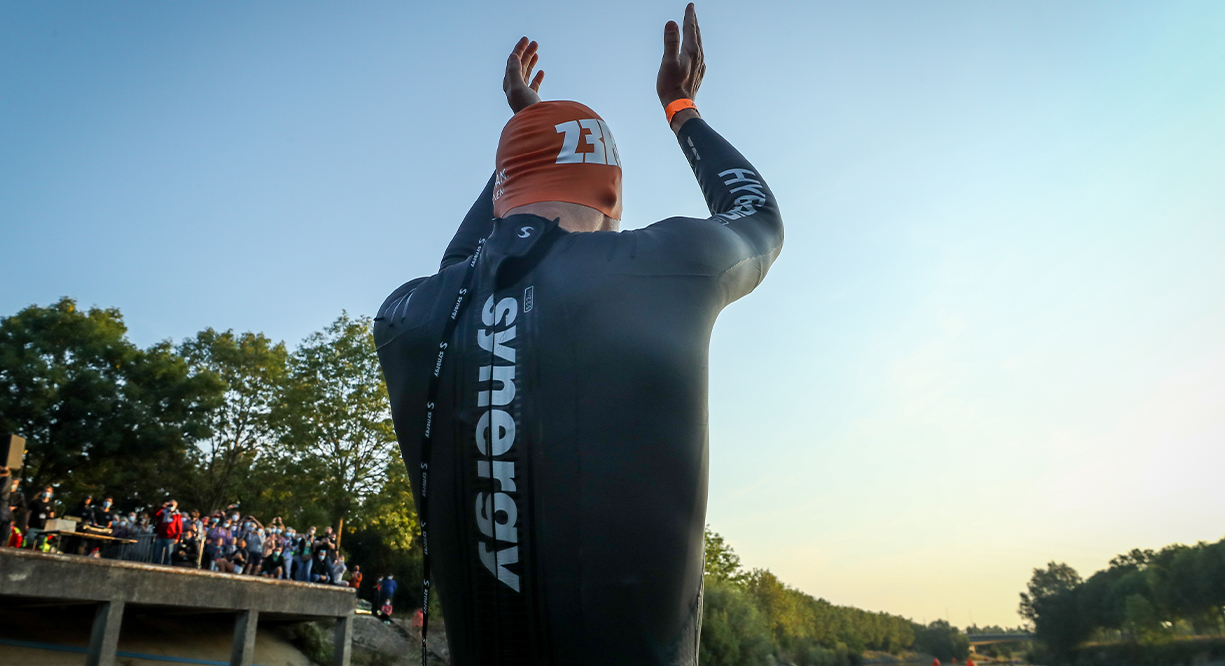 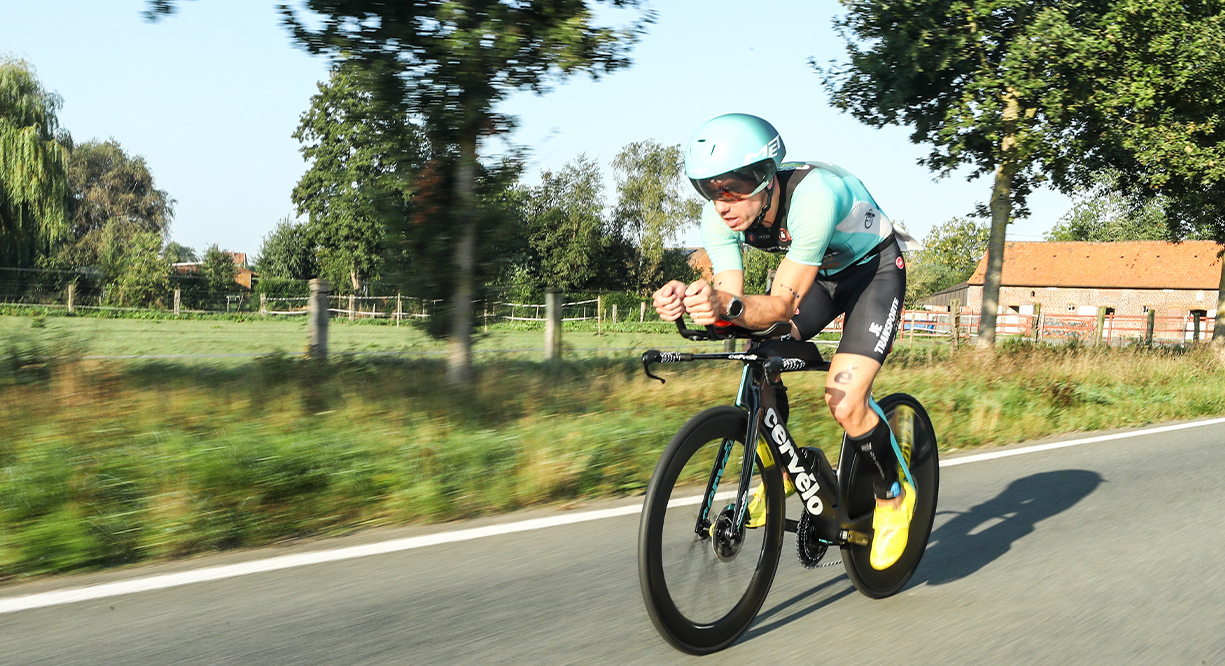 1. Describe as best as you can, how you felt leading up to this race. Knowing it was your very last time?

It was very special and emotional because of many things! Ending a career of 23 years is kind of a tilting moment in my life. I was prepared for it (decision was made in the end of 2017) but still ... With this special year, many races didn't go ahead and this put some extra stress of course. Decospan Triatlon Menen on 13th of Sept 2020 will remain my very last one. In my hometown, surrounded by all people I've known for a long time, being part of the organization, loads of media attention, emotions all over the place (many of my family members were already in tears before the start), ... Not easy to focus but once we started, I enjoyed every moment! I'll never forget this one, this very special day!

2. How did the day play out and your sensations throughout the race? Surrounded by family, friends and fans must have been something extra special.

It was hard to keep the focus through the whole race ... my 2 transitions were not the fastest in my career... Physically I was in good shape but still the situation was not ideal to race at my very best level. My swim was probably the best part of the day, I came out of the water in second position together with Pieter Heemeryck. After a real struggle to get my wetsuit out, I started the biking part together with Pieter. He took the lead and I had a really hard time to follow him ... We rode 1h55´ over almost 90km...a crazy hard pace! We managed to make a good lead over Bart Aernouts and the rest of the field by the start of the run part. On the run I could immediately feel my legs were tired from the bike part. Pieter stayed with me, we ran a good pace and I enjoyed all the support from the home crowd. Halfway through the run part Bart closed the gap. The top-3 was known with only 3km to go. Then what happened was the most special: 200m before the finish line Pieter and Bart waited for me (this was their decision and it shows a lot, true gentlemen) to run together to the finish line and letting me win one more time! Too good, no words! 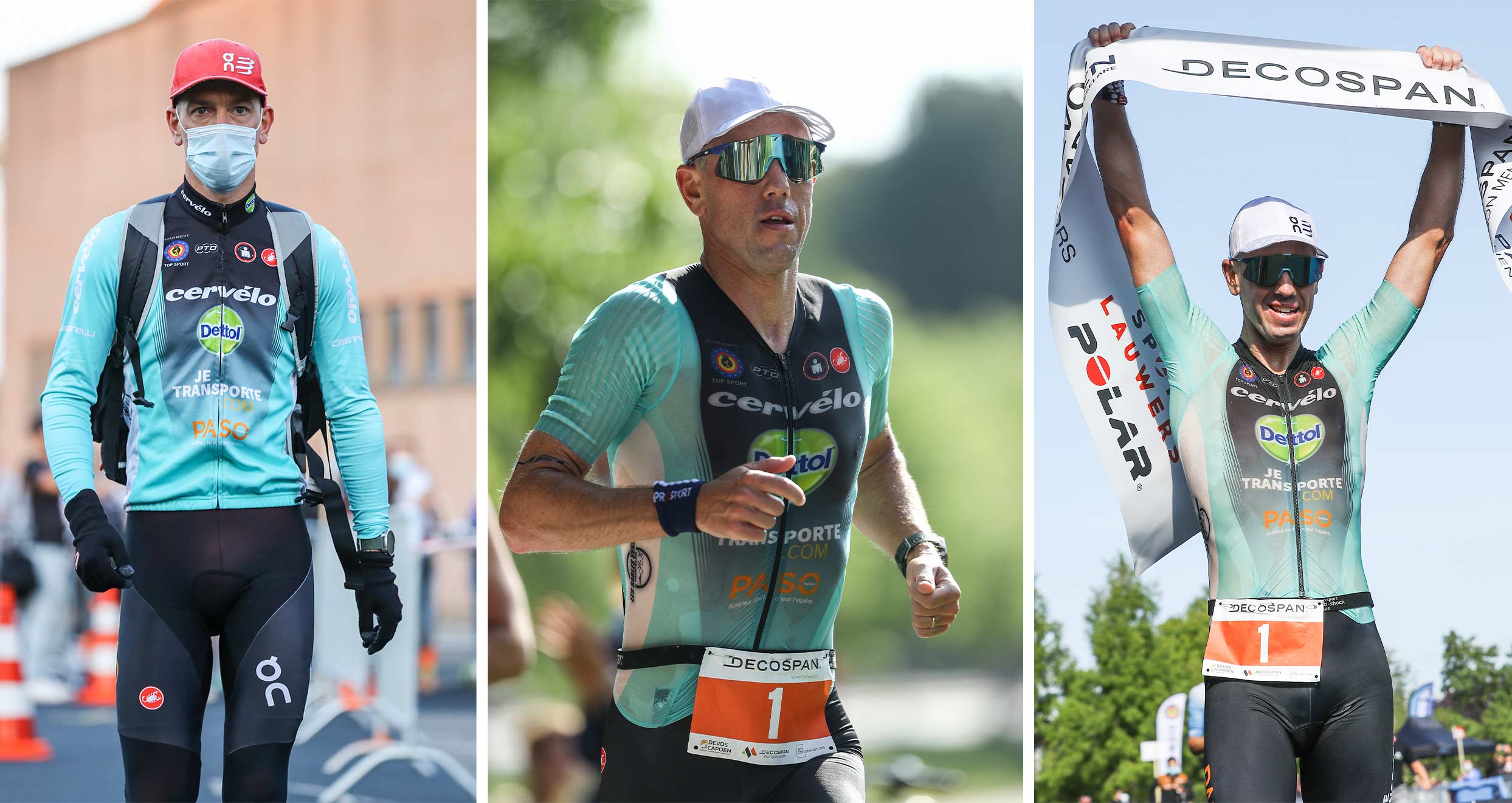 3. You helped create the Decospan Menen Triathlon, not knowing it would be your last race. Yet it ended up being one of the only triathlons allowed to go ahead. It was rather symbolic in a way. How do you feel about that?

Exactly! It's literally 'coming home' after all those years on the road to race and train. In fact when you think about it now, there could be no better ending to my triathlon career and story like what happened last Sunday. Next to that, as a first time organizer we received plenty of positive remarks, the people loved to race in Menen! 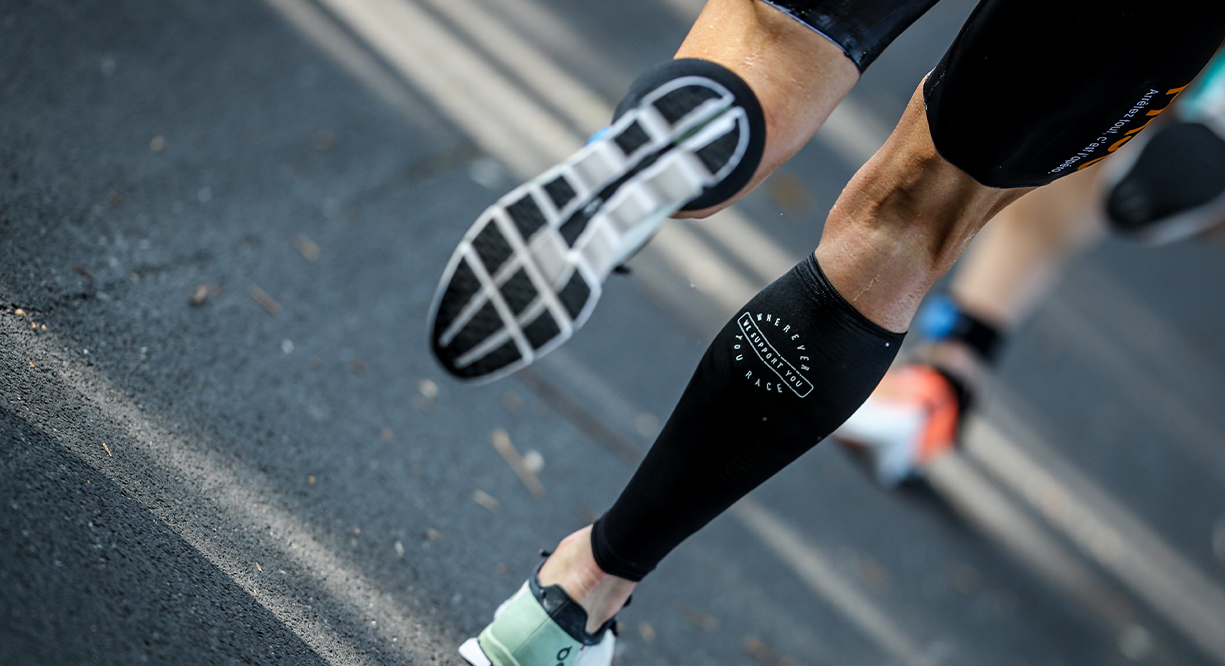 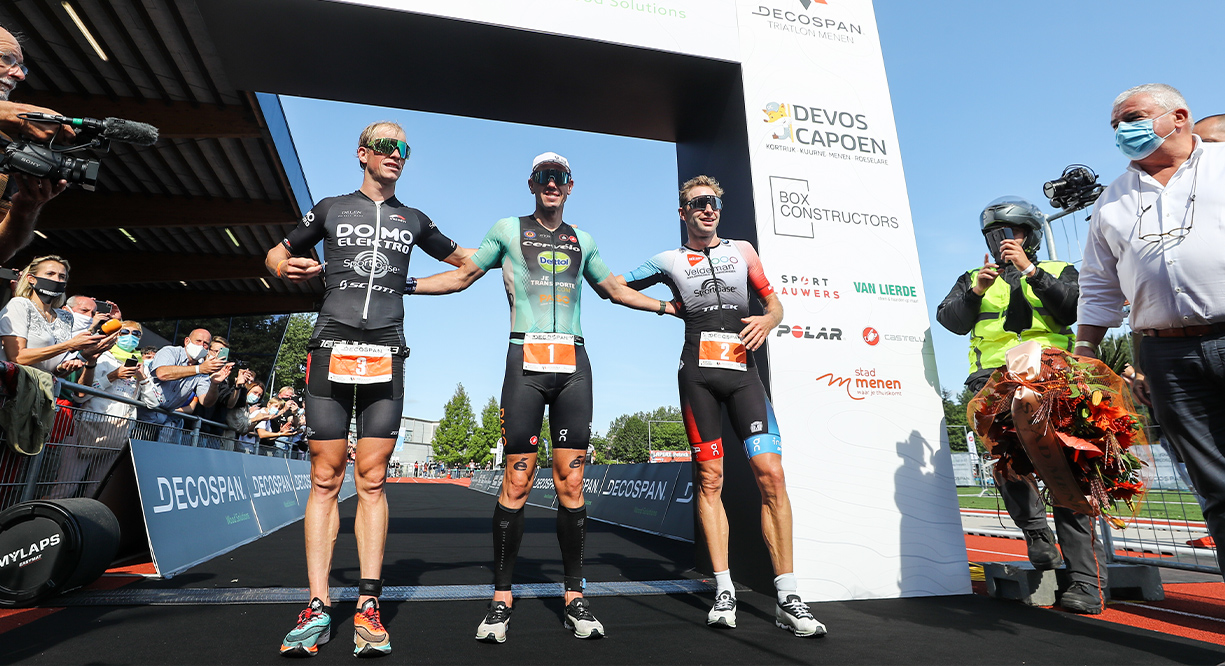 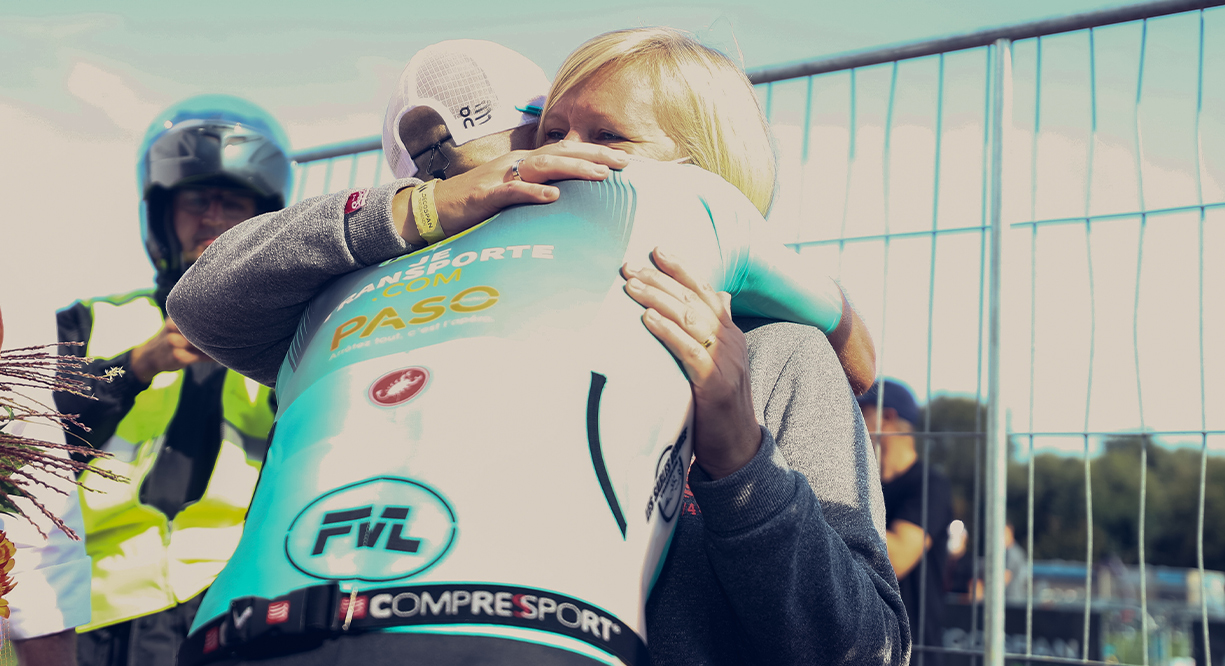 4. How did you train for this year, knowing it was your last? Did you take a more relaxed approach or train as hard as always?

Physically there were no big changes, hard as always! In the first couple of months (before Corona) a similar approach like we did the last years with plenty of volume. Once the lockdown was here, in Belgium I was able to continue and train with no restrictions (lucky) so I could keep my fitness without knowing when to race. By the summer I started my preparation towards Embrunman and Ironman France Nice. Unfortunately both got cancelled in August so I had to refocus on only 2 races left : Les Sables 70.3 and Menen. Shorter and harder training sessions to get me ready for both races.

5. If you could choose just one thing, what are you most proud of in your racing career?

Kona 2013 for sure, it's the pinnacle in our sport! Super proud of that one. Not easy to manage to win over there and then realizing you did it. It's a fantastic feeling! 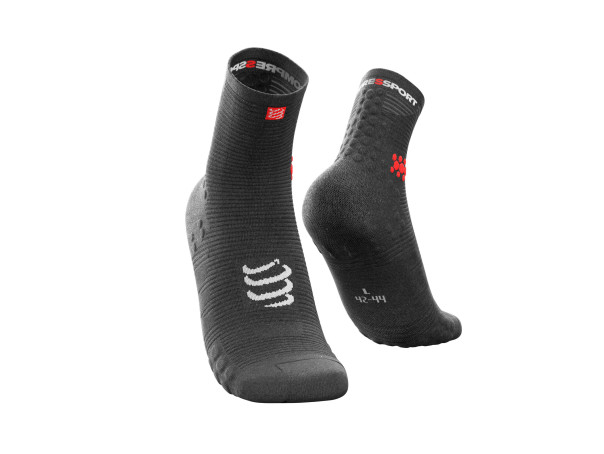 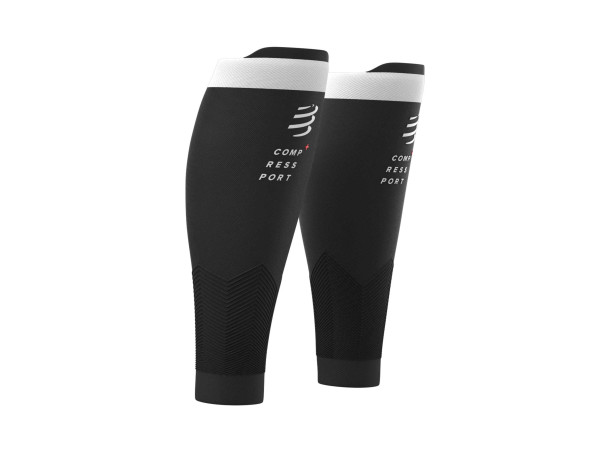 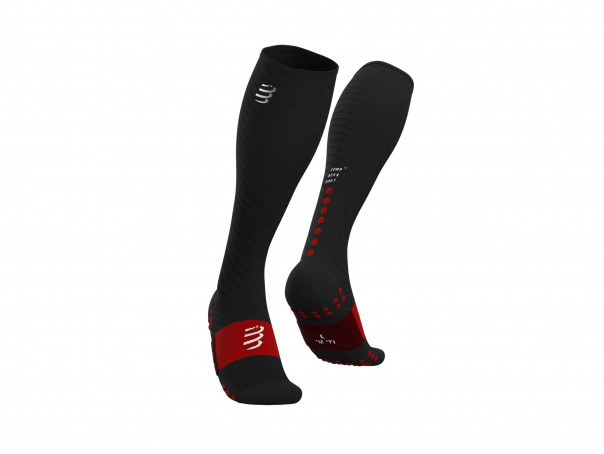