She has a palmares in Ultra Trail Running that most runners only dream of, not to mention her incredible feats in mountaineering. Brazilian born Fernanda Maciel was the first woman to run up and down Aconcagua, the highest mountain in the Americas, and also holds the female Fastest Known Time (FKT) on Kilimanjaro.

But even with all of that under her belt, she had a dream to conquer one of her biggest dreams and fears at the same time….summiting the famous Swiss Matterhorn. Whatsmore is that she also decided to aim for the FKT on the Gran Paradiso before the ascent of the Matterhorn, providing an extremely difficult attempt in one single day.

Climbing without rope in solo style, Maciel reached the 4,061m summit of Gran Paradiso in just two hours and forty minutes, completing the round route in just four hours and three minutes to better her own previous FKT. She then transferred to Cervinia, in Italy, and climbed the 4,478m Matterhorn summit. It was a very emotional moment for the Chamonix based adventure athlete who suffered frozen eyes in an accident on the Matterhorn three years ago and lost her flatmate in an accident there last year. She overcame her fears to complete the feat just one day before a landslide trapped 25 climbers on the mountain.

"I have been trying to climb Matterhorn for many years and I was super scared but these mountains represent a physical, emotional and spiritual challenge for me and I wanted to do this as a mountain running project. I cried a lot on the summit, remembering all my past. I couldn't believe it to have made the summit of Gran Paradiso 40min faster than my old best time and then to have reached the summit of the Matterhorn after facing my fears and emotional struggles." 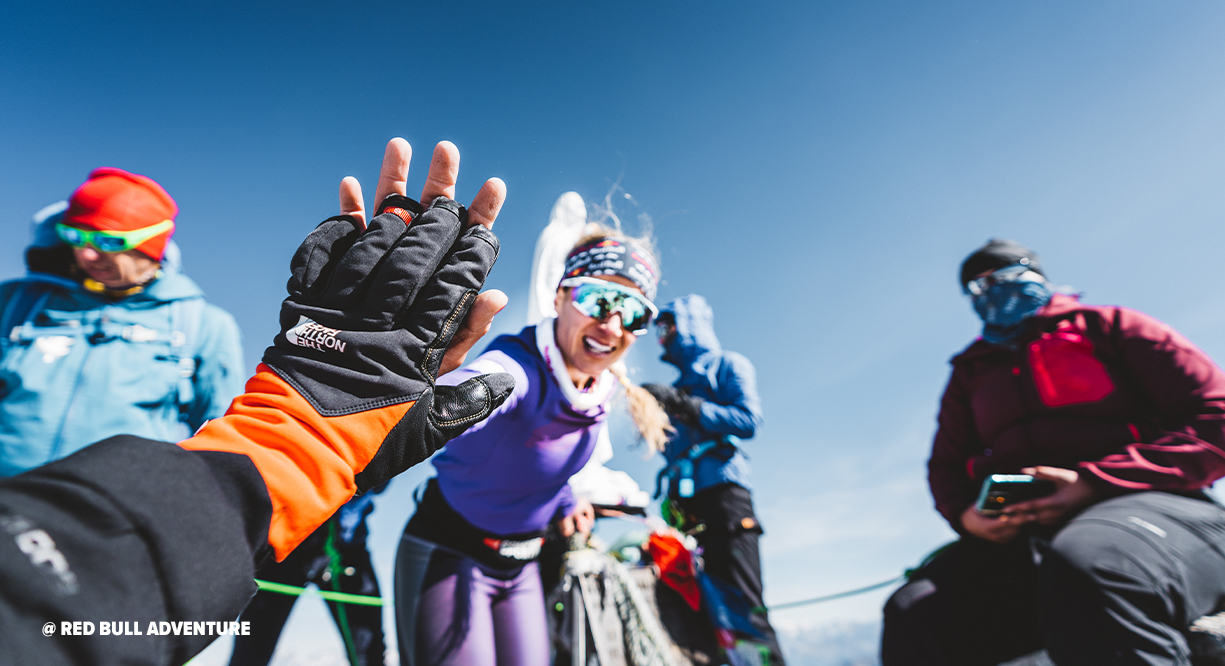 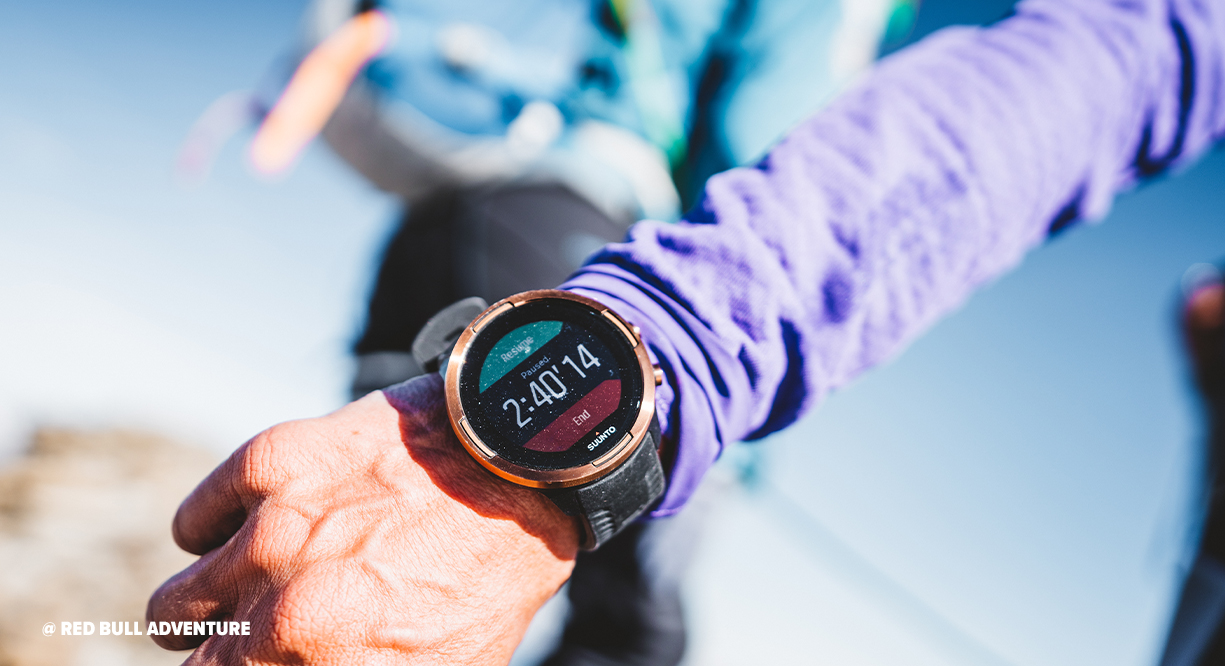 Even with all that she has accomplished, her latest achievement was one of her hardest yet, as not only did it involve highly technical glacier running, it finished with a challenging alpine ascent on a mountain where she had previously been forced to turn back just 300m beneath the summit.

"Pushing my body limits running on high altitude glaciers in Gran Paradiso was super hard but the Matterhorn was the most challenging because the fear I have blocks me. The Matterhorn is a very dangerous exposed mountain, with an exposed rocky and ice terrain which makes us respect this mountain even more. I'm super happy that I managed to do this sequence as I'm not an alpinist and being able to do these fast alpine routes is insane for me."

Tell us about the project and the reason behind it?

For me it was more about representing two mountains where I want to test myself. It didn't make sense to go for a record climbing both of these two mountains, but it did make sense to go for the record in Grand Paradiso because Matterhorn was another separate challenge. I couldn't see myself doing a record in Matterhorn, but yes in Grand Paradiso. So I tried to do it without rope, in solo style which for me is super hard as I am not an Alpinist. The terrain is super technical with ice, rock and a lot of climbing to reach the summit.

What is the significance of this route for you?

So I chose both the mountains as Grand Paradiso presented me with a personal challenge, while the Matterhorn was more about an emotional and spiritual challenge because I had some issues in this mountain in my past which I wanted to overcome. One was when I froze my eyes and the other time was when I lost my friend on the mountain. So this mountain became not only physically difficult but emotionally too…..In essence it was mostly about facing my fears. Being close to my home in Chamonix and this extremely beautiful mountain is extra special for me. 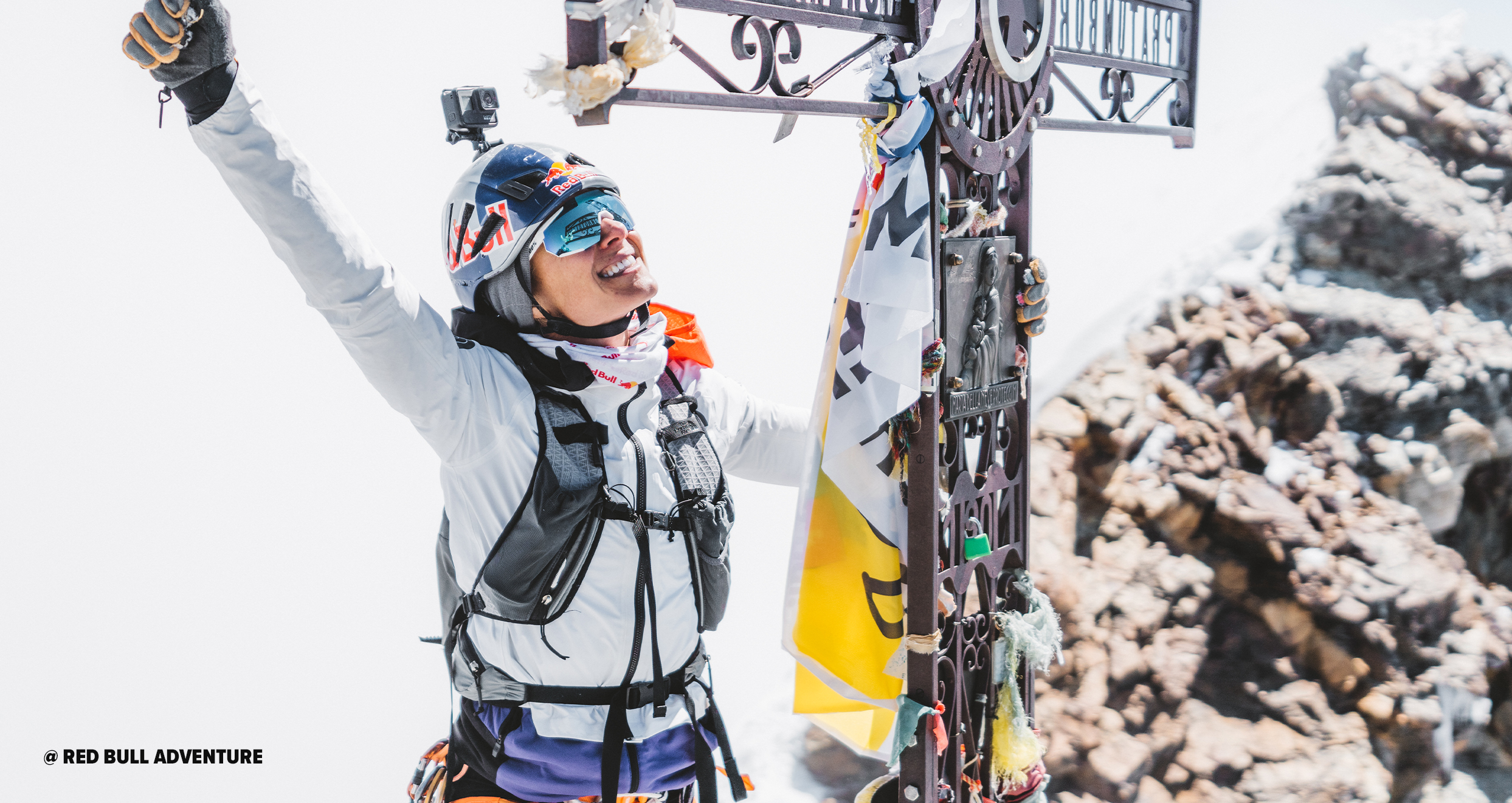 How did you feel during the route?

Four days before the project, I tried to do Matterhorn and Grand Paradiso as a test but I just couldn't do it. I reached 4,100m of the Matterhorn and I was just completely blocked. I couldn't keep going…..I was crying and remembering my past, so I decided to turn around and head to the Grand Paradiso. I tried that without a rope and I did ok. I was able to do it as a training. But two days later and before the project, I called my sponsors and told them I wouldn't be able to complete the project. The Matterhorn was simply too hard for me. Then I had a friend offer me words of support and advice, telling me to give it a try….if I didn't make it I could return, telling the story about the fear I had. So I decided to give it a try even if I was completely sure that I wouldn't reach the summit. Actually I just felt super good during both climbs. I kept myself in the present moment and focused on reaching the top. So when I reached the top there was this feeling of liberation...there were so many years dreaming of that mountain.

Explain the training preparation you did to prepare for this?

Physically I started to do much more Alpine routes like Mont Blanc. For example I did the Brevent vertical climb (famous in Chamonix) 6 times in one training, just so I knew I would be able to do more than 5,000metres vertical gain in one day.  It was important to accumulate a lot of metres elevation gain and a lot of time in the high altitude, especially since this is my weak point. I am super good at the downhills but not so good uphills. So I had to train this part even more. Of course it has also been important to train my fear process. I have been doing therapy and I did some personal coaching with Nina Williams who is a climber at The North Face. She helped me a lot, to accept my fears and working on that weakness, just to be able to face The Matterhorn.

How did you get support throughout the course if any?

Grand Paradiso was solo without any support.In the Matterhorn, I couldn't  find any mountain guide to assist me, so I had a good friend Genis who was behind the rope and helping me as I needed, so I felt safe. 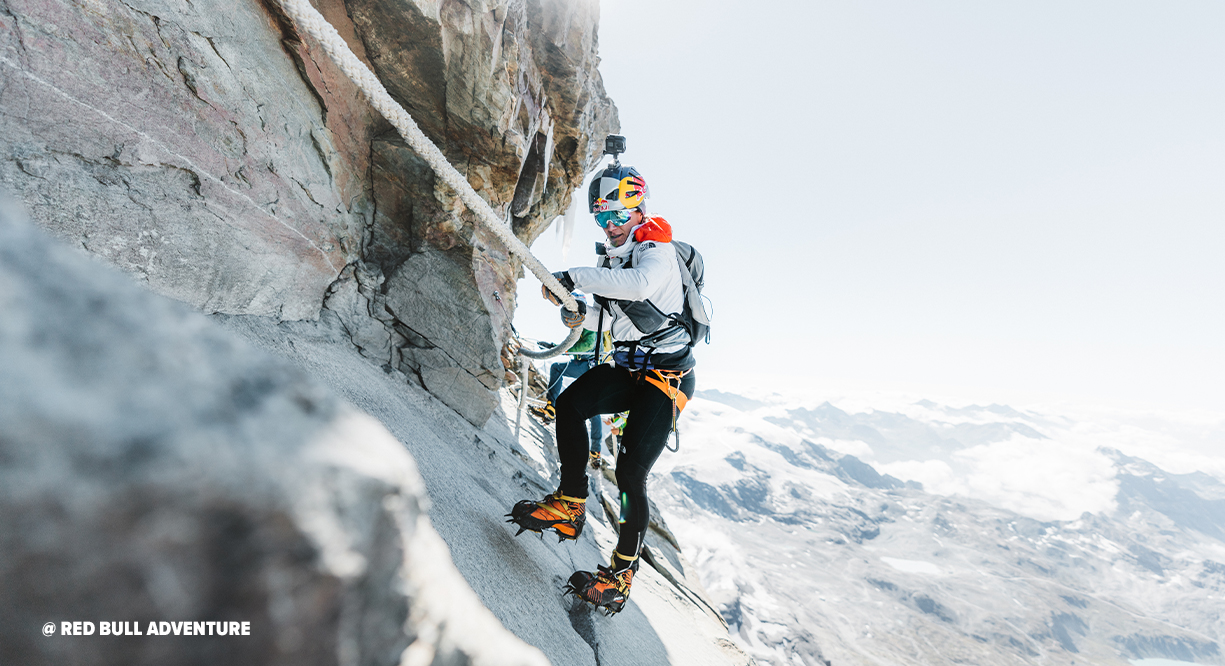 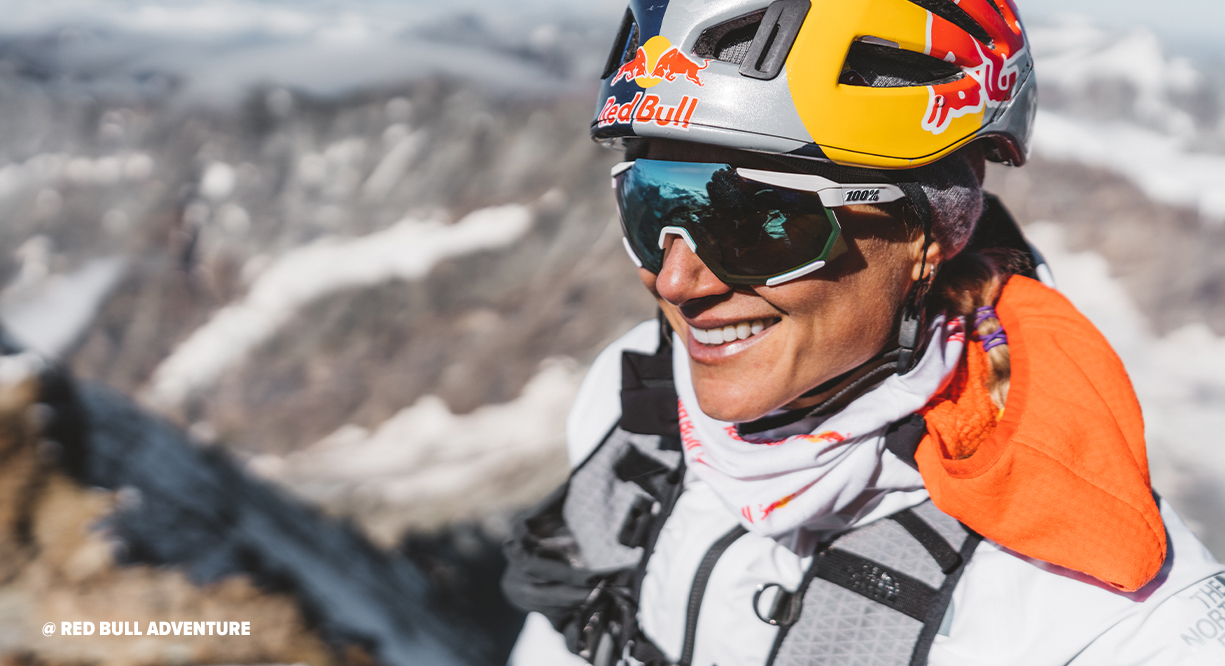 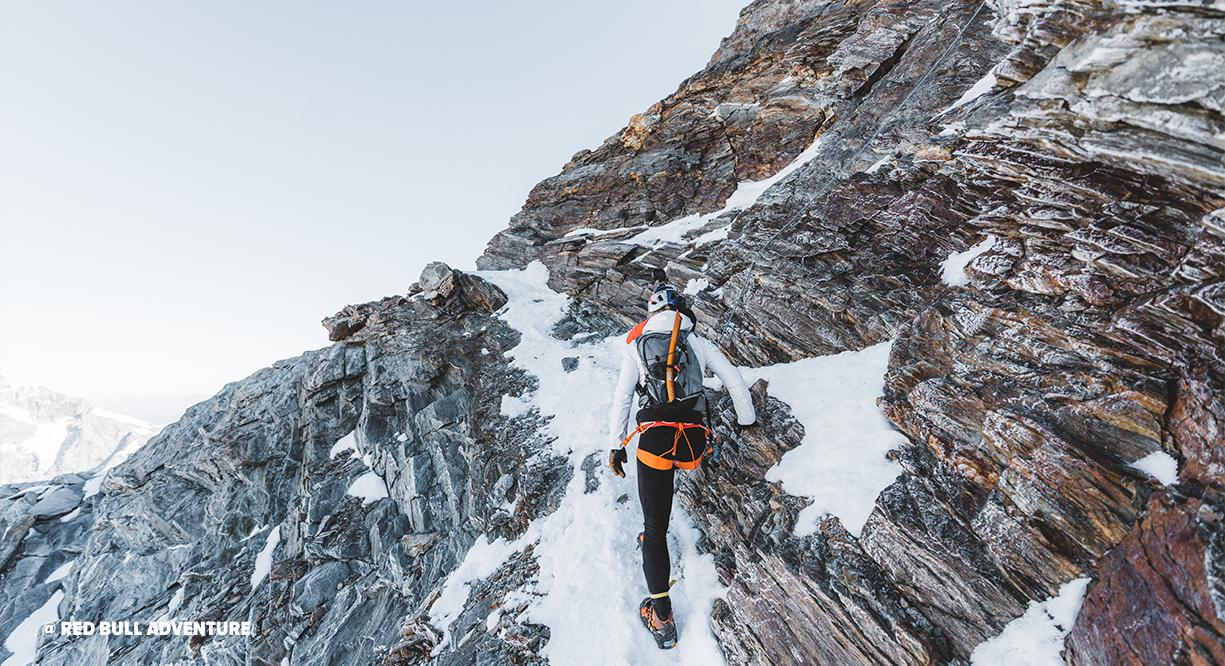 What is next for you? Do you have some races or other things planned for the remainder of the year?

For me right now, I am not focusing on any racing this year. I am trying to use the time to focus on some personal projects I want to do and prepare to race next year in January. So right now I am going to Spain. I have a run and climb project there. It is super exciting for me. I will share all about it next week. It is a good year to share places that I have dreamt of going to, before but never able to do. We always have so many races that you cannot do so many other things especially as the Ultra Races, you need to be well prepared and when you finish, you are extremely tired. That's why I think this year is a great opportunity to do projects and rest a bit more from the races and next year I will come back to the races once more.

What Compressport products were the most important for you during the course? Why?

I used the Full Socks Oxygen, Free Belt Pro and Soft Flasks. They were each amazing products that helped my performance a lot. Straight after the Grand Paradiso I also used the Full Leg during 3 hours to help speed up the recovery and improve the blood circulation so I could be prepared to tackle the Matterhorn. 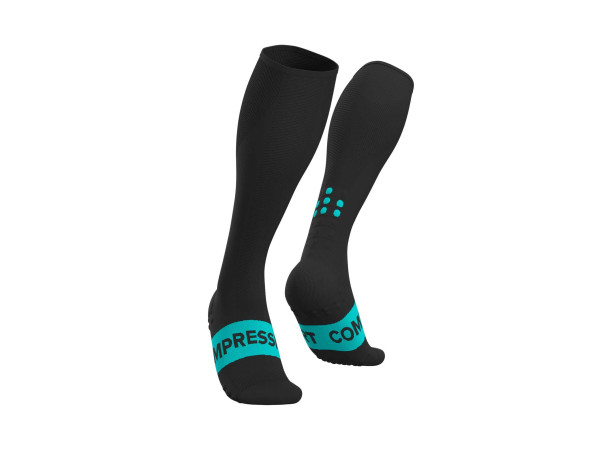 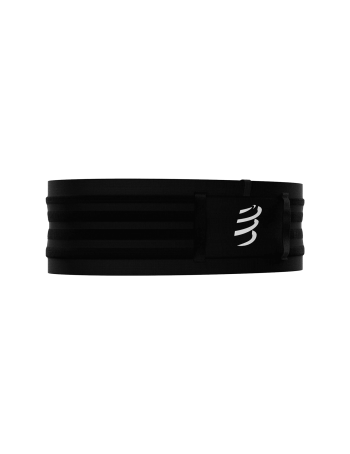 High-performance, no-bounce black running belt to carry all essential equipment for up to 6h on the trail 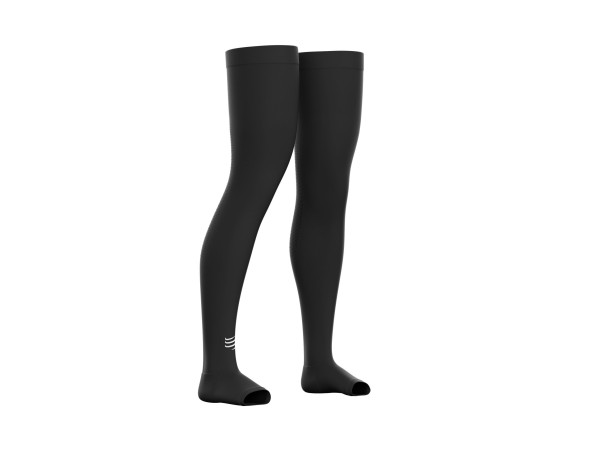 Full leg compression sleeves to recover in no time with an immediate feeling of well-being and freshness.